This article is possibly outdated. It mentions an older version of a software or tool. I haven't checked if the links are still working!

IBM sold their collaboration tools portfolio to HCL Software in 2019, so the product names changed and most of the IBM links are no longer working.

After installing i went to IBM Fix Central and look for the latest fixes. There are 7 Fixes available and for Multi Mobile Patch it shows a superseded fix. So i decided to download patch one to seven and ignored july mobile update. 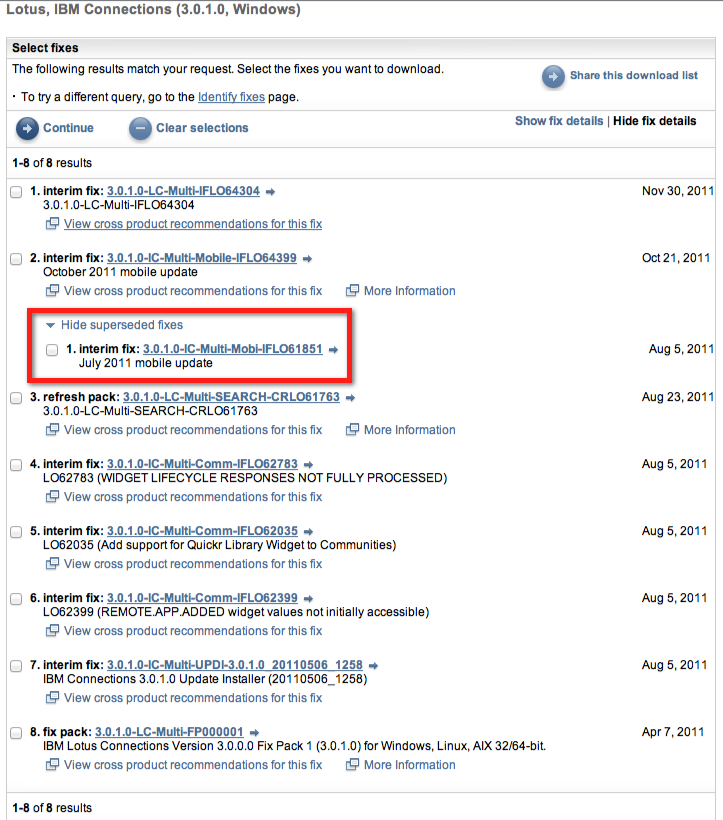 I installed the fixes as ever.

After the installation i can’t use the mobile apps for iOS, android or Blackberry. The error messages shows “You have to install the July 2011 mobile patch to use this app.”

I made a download on Fix Central again, because i thought i made an error to ignore the july patch (LO61851), so i mark LO64399 (October Patch) to download and activated “Include requisites: Yes” and got following download options:

No other patch is shown as prerequist for this mobile patch! But i downloaded july fix (LO61851) to test this one.

Shazza Bellamy gave me the hint to install the august mobile fix (LO63049). I searched on Fix Central, but no download was available. One of my colleagues stored the patch on our NAS and she sent it to me too. After uninstalling the other two mobile fixes i installed august fix (LO63049) and restartet again and what should i say? On both Connections Installations the mobile Apps are working.

I don’t know why LO63049 isn’t available on Fix Central and i have no idea why LO61851 is not enough for mobile Apps on my new installations. I have older systems which are updated from 2.5 or 3.0 where only LO61851 is installed and mobile apps are working.

Perhaps i can save you time with this post, because i invested some days on discovering the error and installing fixes again and again.

Today i read a post on IBM Developerworks, which describes the error and a solution. Sjaak Ursinus found the reason of the failing update: ifix LO64399 and Windows 2008 R2

A lot of people don’t like to store credentials in mobile apps or browsers. A good workaround is the usage of OAuth 2.0 tokens, but the application needs to support it and the server you’re talking to too. The IBM Connections Mobile App can use it for authentication.

OAauth2 can be used directly with WebSphere Application Server and Connections 6.0. There are no special OAuth servers or applications needed!

The Documentation at IBM was a little bit confusing for me, there are lots of sidenotes, but you just need to do following steps, to use OAuth 2.0 token-based authentication with the IBM Connections Mobile App.

Missing images in Wikis after migration to IBM Connections 5.5

Wikis in IBM Connections 5.5 have a little bug, because the link (/library instead of /wikis/form/api/library) for images are wrong and so they are not displayed.